Three Lessons in Keeping a Ram

It's that time of year.
Love is in the air.

Well, if you're a sheep that is.

And if you plan on having lambs this winter or spring you are going to need a ram.

This will be our third breeding season here at the homestead and while this makes us far from experts we have learned a thing or two about keeping a ram on the property. We have mostly learned through making mistakes and I would love to share them with you so you don't have to learn the hard way like we did. 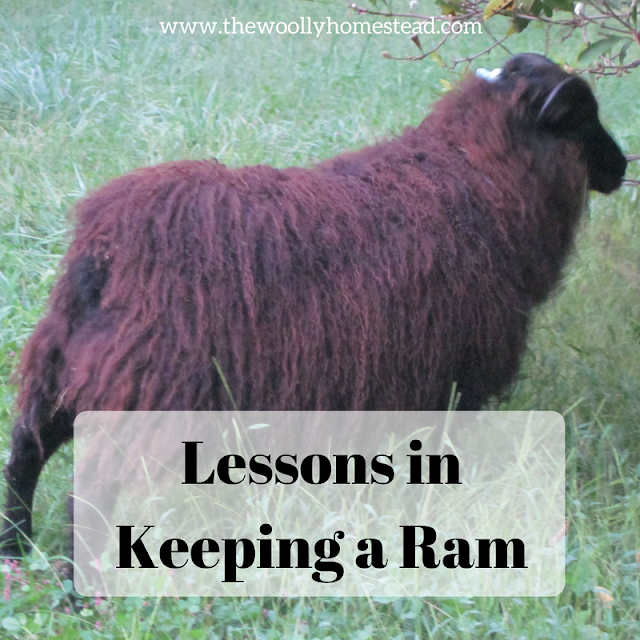 Lesson One: Teach Respect and Manners

We bought our first ram three years ago. He was a 4-5 month old Icelandic ram. He was cute and still pretty small compared to our adult ewes. And while I had read up on how to handle a ram prior to purchasing him, his size and cuteness made it easy to forget that a ram should be treated differently than ewes.

Most people want friendly sheep. It is much easier to handle an animal that will readily come up to you. Since females are generally not very aggressive, especially with people, we train them to come right up to us for treats and scratches. From our experience, even if a ewe gets pushy waiting for her treat, she still never becomes aggressive. If she doesn't get what she wants, she will just walk away.

So even though I knew I should not give treats from my hand to the ram and allow him to be so forward, I did. He was cute and friendly and I couldn't imagine him becoming aggressive. He got treats and scratches and I didn't correct him when he approached me in a forward manner.

This was all fine and dandy that first breeding season while he was still a lamb. However, by the next fall it started to cause some major problems. He became very forward and would approach us even when we didn't have the treat bucket. He would act normal and then all of a sudden ram into you. He even started to ram with a running head start. He became dangerous and a liability.  We kept him for a few months to make sure all of the ewes were bred and then we butchered him.

We are now using a different ram and this time around he gets treated very differently. For one thing, the ram may only approach me when I am carrying our yellow treat bucket or when invited, otherwise I chase him away. If I do allow him to approach me I make him turn to the side so he can get some scratches on his rump. He is not allowed to be pushy and face me directly. I want him to be friendly but respectful. I never want him to think of me as being on the same level as him.

With our first ram we had gotten him to be friendly enough by giving him treats but we never taught him to be handled. He was forward enough to get close and ram you but he was impossible to catch. This made dealing with him a nightmare. He was hard to catch and put up quite the fight when we needed to handle him. This means it took two people to deal with him even just for basic routine care.

We have since decided to halter train all of our rams. With our current ram he knows that whenever I have my yellow treat bucket he may approach me and allow me to put a halter on him. Once the halter is on him I tie him to a stake I have in the ground. This way I can safely be in the pen with the other sheep without having to constantly keep my eye on the ram. When I am finished, I will take him for a little walk around the pen to keep his halter skills fresh and then he gets another treat for waiting patiently when I take the halter off. Halter training has made handling this ram so much easier and it has also made being in the sheep pen so much safer since I can tie him up when needed.

I think the reason I am having so much trouble with the breeding harness is our set-up. We practice intensive rotational grazing. We use electronet fencing and move the sheep every day or two to new grass. For shade we have a mobile shelter that we move along with them. During the peak heat of the day almost all of the sheep are laying under the shelter. I found this is when our ram decided to play with the ladies. He tries to mount them and because of the small space and the fact that they have no intention of leaving the shade, he is able to at least partially mount them. Thus leaving a mark even though the ewe is not bred. I have heard of similar stories of rams mounting ewes while the ewe has her head in the hay feeder. Rams are sneaky and I wish I would have known that this was a possibility before dumping a bunch of money into a harness and crayons. 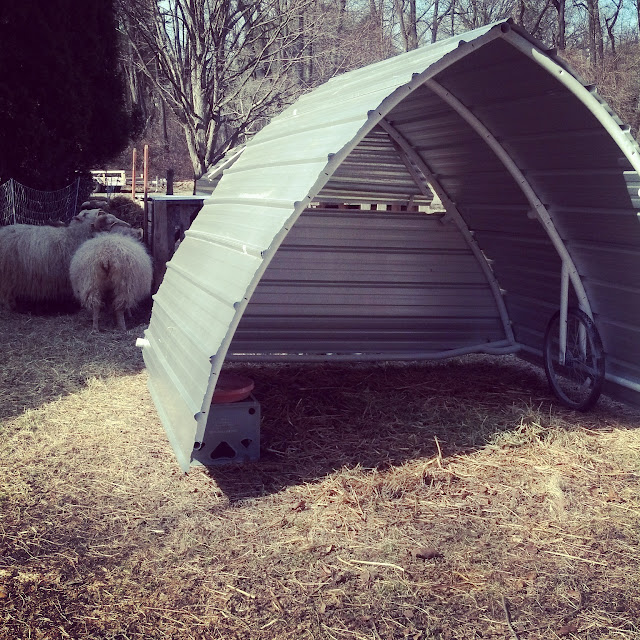 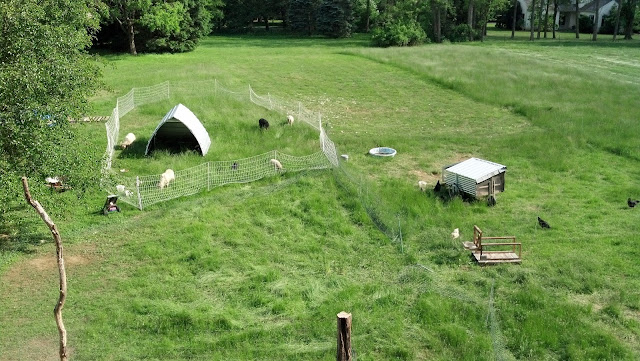 I hope others can learn from our mistakes. This post from Stonehaven Farm is a great resource for dealing with ram behavior. Keeping a ram doesn't have to be hard but you always need to be intentional and aware.

P.S. This post may be linked up with some of my favorite blog hops.